The Cache County Attorney’s Office is the leading prosecution organization in the county. The largest division is the criminal division which is comprised of six prosecutors and the county attorney. Combined, this division has over seventy-five years of legal experience. This experience is put to good use as the responsibilities in this division are varied and complex. The prosecutors in this division are statutorily and morally charged with the solemn duty to see that justice is done. This includes making certain that the rights of both defendants and victims are protected and that crimes are vigorously prosecuted. 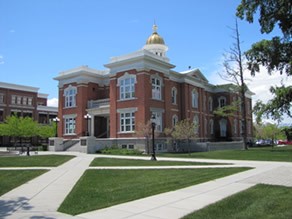 To better achieve economies of scale, each of the prosecutors in this division have a specific assignment. Mainly, this is done by allocating a prosecutor to a specific judge. Three prosecutors are assigned to each of the three respective judges in the First District Court and one prosecutor each is assigned to the First District Juvenile Court and Logan City Justice Court. The remaining prosecutor floats between the three district courts where they handle cases involving violence against women and children.

Some prosecutors specialize in their practice allowing them to target the prosecutions of specific crimes. These include domestic violence, child abuse, drug-related offenses, juvenile crimes, fraud, and crimes committed by individuals with mental health diagnoses.